Did Obama tell the truth about Manufacturing?

Did Obama tell the truth about Manufacturing?

During his 2014 State of the Union Address, President Obama lauded the rebound in manufacturing as one of the bright spots in the economic recovery. In previous blogs we noted that in terms of employment, the manufacturing sector, while equally hurt by the 2008 downturn, was one of the first segments to start recovering.

The chart below shows new orders by the total US manufacturing sector from 1993 to 2013. The curve is normalized to 1993. We have included the inflation curve for the same time frame. 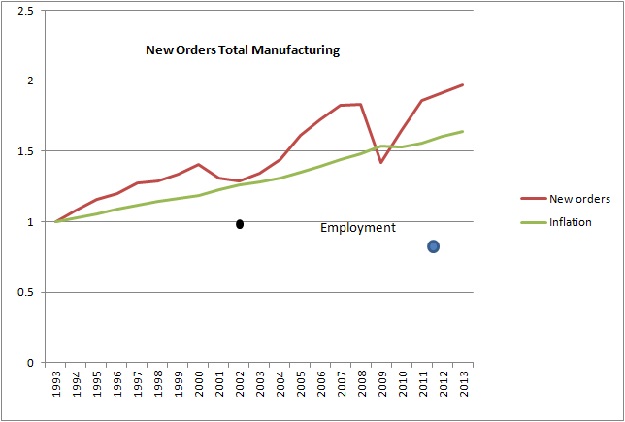 The red line shows the sharp drop in 2008, and it shows a steep recovery to the point today where total order volume is progressing at near the same rate as pre 2008. Note that the growth rate from 2000 to 2007 was much higher than historical rates and was largely affected by the housing boom. 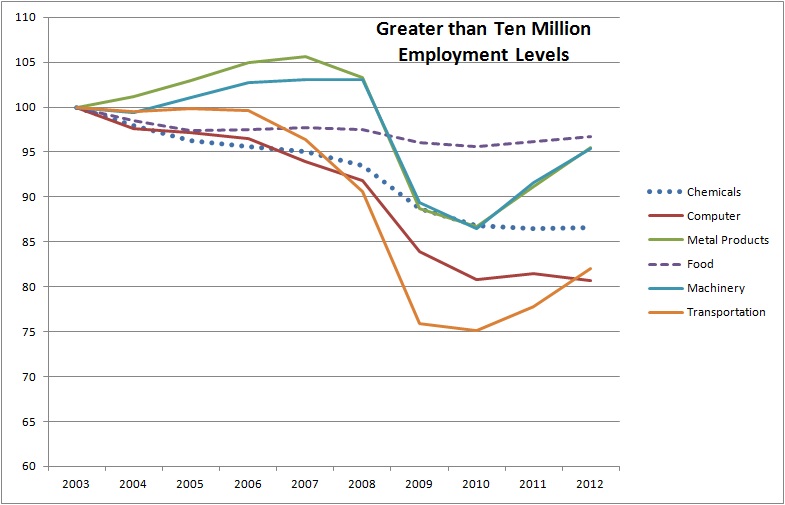 The growth in new orders for the manufacturing sector does not extend across the board.

The Chart below breaks out new orders by some of the major manufacturing sectors.

As can be seen by the graph, transportation and Construction Materials have rebounded nicely, but Computer, Electronics and Information Technology have stayed flat or dropped. The Construction Material and Supplies sector seems to match up with data on new housing starts. Information Technology, Computers and Electronics have been a booming world-wide but US companies have lost market share to the rest of the word. Also productivity has played a major role in this trend as anyone who purchased a computer 10 years ago compared with prices today can testify. Computers and electronics are significantly less expensive than a decade ago and people are buying more, but the product mix is for lower cost electronics such as mobile devices as opposed to high end desktop computers. The average mobile device is about a third of the cost of a desktop.

In addition to touting the rebound of manufacturing, President Obama discussed investing in training and skills to close the skill gap. While it is encouraging to see the rebound in manufacturing and the possibilities of high paying jobs increasing because of that, one also needs to understand that manufacturing employment today constitutes about 8% of the total workforce – https://www.bls.gov/emp/ep_table_201.htm
and is projected to go down to a little over 7 % in the next 6 years. Manufacturing employment levels were 60% higher at its peak in 1979 and started a major decline as far back as 1999. Manufacturing training initiatives are very important and needed, but the impact on overall employment may be miniscule. The service sector, most notable, health and health services, professional services and education services will see the biggest gains in employment over the next few years. The biggest bang for training dollar might be in the service sector.

In conclusion, President Obama was right in touting the growth in manufacturing and any training initiatives that close the skill gap is well worth it, but future employment and economic recovery may depend more on the service sector than the goods producing sector. Investing in training and education in the Heath Care, Professional Services and Educators may be better for long term employment growth.

When it comes to packaging, not all foam is equal

Foam is foam, right? It would be easy to believe that one of type foam is all you... read more

When choosing a supplier for your company, cost is (and should be) a major factor in the selection process. ... read more

Packnet has a number of core competencies relating to custom packaging solutions for industrial applications.   In terms of materials,... read more

Start the New Year with a free packaging assessment

A good packaging system should protect your product during shipments and storage, but have you considered other potential benefits... read more

One problem that Cortec runs across fairly frequently is addressing old and corroded structures that have steel reinforcement.   This... read more

Ocean Cargo rates could continue to increase in 2013

Ocean Cargo prices went up dramatically in 2012 as carriers tried to recover from high fuel costs and damaging... read more

The Department of Homeland Security issued guidance on "Essential Critical Infrastructure Workers", as executed by the Cybersecurity and Infrastructure... read more

The video below shows a Chinese baggage handler blatantly abusing the packages being loaded.    Less than half the boxes... read more

Packnet saved ADC Telecommunications over $150,000 a year in packaging materials by customizing one of its featured products. ... read more

The severe weather that most of north America has been experiencing recently has been a stark reminder that despite... read more