What is an ion?  An ion is a particle such as an atom or a molecule that has a charge; it could be negative or positive.   Everyone has heard the expression “opposites attract”, well ions of opposite charges also attract.

What is rust?   Most metals have iron and have a positive charge because there are more electrons than protons floating around in that molecule.   Oxygen as a pure element is neutral but it normally picks up other elements and has a negative charge.  Iron molecules and Oxygen molecules will tend to attract to each other.  When iron and oxygen combine in the presence of a catalyst, they form a new substance called iron oxide (rust).  The needed conditions for rust is metal, oxygen and ionic contaminated water. This new substance is less dense (takes up more space) and does not have the desirable properties that iron has (conductivity, strength and cohesion.)

Metal gives up its ions to the oxygen because it has a few extra ions to spare.   The most common catalyst for this chemical process known as rusting is water with ionic contamination (salt).  Ion contaminated water is very conducive to election movement  which is required for metal to combine with oxygen.

Without salt, water alone may still have enough ions to help the rust process, but it will be very slow. Distilled water, which has no ions, will not cause rust unless it combines with contaminants that may already be on the metal surface.   This is why we hear about cars corroding faster in cold weather climates where salt is used to melt icy roads.   Those who live on the coasts will also see cars with some very slight corrosion because of the salt mist from the ocean.

The bottom line is that rust is caused when the iron in the metal gives up its ions to combine with oxygen to form an oxide.   Salt and water  act as a catalyst for this process.

So how does Cortec’s VpCI work?   The VpCI is a vapor that is loaded with special corrosion protection ions.   These Ions are just floating around waiting to bond to something that also has a charge (metal).  When these ions come in contact with metal, the ions bond to the surface and form a protective molecular layer.    This protective layer resists corrosion and can protect the metal surface for several months. 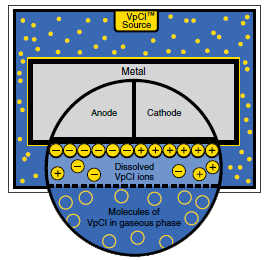 Cortec is one of the world leaders in corrosion protection.  Cortec has solutions the work in just about every application where a surface can corrode.   The VpCI molecules are different depending on the type of surface that needs to be protected.   The method of dispersion is through a saturated vapor that condensates on the surface and forms an ionic bond to the metal.  Cortec also has corrosion inhibiting products that can be applied by spraying, brushing or immersing.   Packnet proudly distributes Cortec products, for more information, see our corrosion inhibitor page or contact Packnet to speak to an application specialist.

Most of our major allies are peace loving societies where going to war or conducting any major military action is... read more

In our last blog we stated that, in general, the carrier is liable for product damage when it had control... read more

Last July 2013, a Piper Seneca made an emergency crash landing at Durham Tees Valley Airport in the UK. The... read more

A few more corrosion issues that made the news this month: GM Announces Recall of More than Half a Million More... read more

What is the ROI of corrosion protection?

There was a recent press release about a company that created an online ROI calculation tool for adding corrosion inhibitors... read more

Corrosion problems are in the news everyday

Rarely a day goes by without corrosion problems making the headlines.  Corrosion affects products in just about every industry and... read more

The following video is an animation created by Cortec that shows how the VpCI Emitter works to protect products during... read more

Long term storage can present a number of challenges for electro-mechanical systems such as aircraft or vehicles.   Even under the... read more

Sometimes we get asked the following question about our corrosion protection products: “Just how environmentally friendly and safe are these... read more