The housing market has been a subject of several of our blogs over the years.   Our interest is due to the affect housing starts can have on the price of some of the wood we use for our wood packaging products.    A spike in the housing demand can put stress on the supply chain.  Since the crash of 2007, the wood industry dramatically reduced its capacity compared to pre-2007 levels.

Recently there was another hit to the plywood processing capacity with a major fire that destroyed a plant in Oregon and may take 2 years to rebuild (Plywood mill fires are stressing the supply chain). This has already caused plywood prices to increase; any significant upturn in new housing starts could certainly push prices up higher.

So where is the housing market going?   The crash of 2007 is well known and it is also well known that for the housing market is recovering.  But this recovery is slower than many had hoped as current levels are still less than 50% of what it was in 2005.    The question that many are asking is will the housing start levels ever reach the 2005 peak and when will that happen?  The graph below shows the yearly trend since 1990 and includes a projection for 2014. 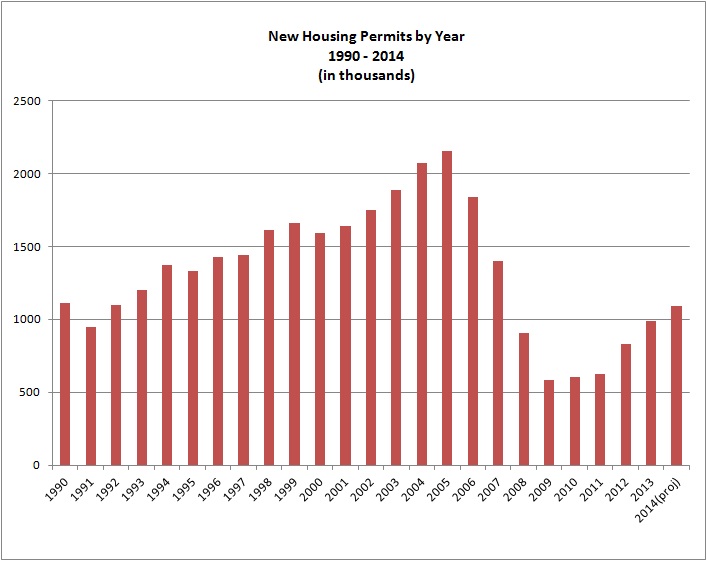 Since the housing market hit bottom in 2009, the recovery trend has been constant although not as robust as some were expecting. How fast will it continue to recover?  From 2000 to 2005, the market grew by 5-6 % each year.  If we grow at that rate, it will take around 10 years to reach the peak we had in 2005.  The average growth rate over the last 3 years is over 20 % per year, but it appears that 2014 will be less than 10% greater than 2013.   In January 2013, the Washington post reported that economists believe that the growth rate in 2014 will slow because of higher interest rates.  Source.  The interest rates are expected stay flat as the Federal Reserve will be cautious not to kick Europe into a recession.  While low interest rates have short term benefits as consumers have more spending money, many economists believe that low interest rates can have an adverse affect on long term economic health as less money is spent on high return investments which tend to feed long term growth.  So there is pressure to move the interest rates up.

Besides interest rates, here are some other factors that could be a drag on housing growth:

With a possible slower housing growth rate, what is the prognosis for lower lumber and plywood prices? It is difficult to say since other factors such as demand/growth in China as well as US and Canada forestry management also plays a role in the supply chain.   The supply chain has been adjusting to the demand fairly consistently by either increasing or reducing capacity.  When the capacity is out of balance with the demand, then prices change to compensate.

Packnet is always working with its supply base to get the best prices possible on wood packaging materials.   We also have been proactively communicating with our customer base on pricing situations.   Our goal is to continue to work with our suppliers to mitigate cost impacts as well as assuring that we have an adequate inventory to support our customer’s needs.

Protecting the surface of a large metal product or part can be a real challenge.   Hot and cold temperatures, rain,... read more

Lean manufacturing doesn’t make sense if the product gets damaged during shipment.

Many companies do a great job of streamlining their process and eliminate waste.  They reduce inventory and cycle time making... read more

Is corrosion protection needed during shipping?

A product that is shipped internationally or stored for an extended period can be exposed to a number of elements... read more

In a previous blog post, we discussed using Oriented Strand Board (OSB) in some of our wood packaging products, specifically... read more

Save time and money with custom designed tradeshow crates

Most companies display their products and services at trade shows.  It may be only one or two tradeshows a year,... read more

As lumber prices soar and sustainability becomes more important, you may want to consider the cost and quality of some... read more

The video below shows a Chinese baggage handler blatantly abusing the packages being loaded.    Less than half the boxes actually... read more 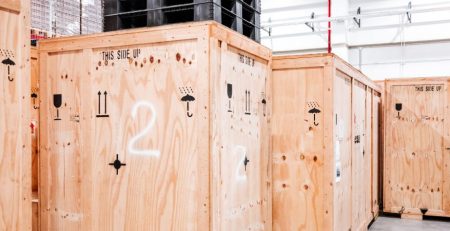 “Smart Technology” is a general term relating to the ability of a device to capture and transmit data as well... read more

Packnet and Cortec team up to solve brass corrosion problem

Brass is an ideal alloy for many applications because of its smoothness, hardness, conductivity and beauty.  It is not a... read more