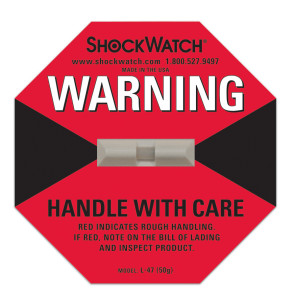 Anyone looking through Packnet’s shipping and handling web pages will find a variety of ShockWatch® products that can indicate if a package experienced unacceptable dropping, bumping or tilting as well as experienced temperature conditions beyond specified thresholds.  The devices can be simple indicators that change color when a certain event is experienced.   There are also much more sophisticated devices that can tell you the times and locations (via gps) of when unacceptable events took place.  All of these products will provide indisputable evidence of mishandling.

There is another claim made that these devices will actually reduce the risk of mishandling.  This claim may not be as obvious as the other claims, after all, does putting a monitoring device on a package prevent it from sliding into a wall, or being dropped from a loading dock?

The answer is yes and there have been a number of related studies over the years that support that conclusion.

First, there is accountability.   There are many studies relating to this, but we refer this article, that discusses how people will exert more effort when they are held accountable with some sort of measurement system.   So when a handler or driver sees that a package has a monitoring system, they will believe that they are more accountable for the handling of that product.

Another interesting study was in Rialto, California where police had body cameras: Source.   One obvious reason for body cameras on police is so that when some incident occurs, there is evidence of whom or what perpetrated the incident.   Many felt it was useful for protecting the police force from unsubstantiated claims.  But another effect of the camera system was that the police force as a whole modified its behavior when they were being recorded.  There were less complaints of inappropriate police action.

A factor relating to accountability is the psychology of “being watched”.  It may be obvious that if people modify their behavior when they know they are being watched, but several studies actually took this premise a couple of steps further.

A study by Newcastle University (source) took place over several months in one of these “honor pay” parking lots.  There simply was a box to deposit money for a parking fee.   The system relied on the honesty of the users to pay the correct fee. The study found that by simply having a sign with an image of “watching eyes” over the box greatly reduced the occurrences of “short paying”.  There was no camera system.  The conclusion was that the “eyes” created a subconscious trigger.  The correlation with packaging is that a ShockWatch® sticker on the package served the same purpose as the image of eyes.  It provides a subconscious trigger that perhaps spurs the package handler to be a little more careful.

Another way the ShockWatch® systems can reduce the risk of damage is in supply chain management.   For example, the supply chain for automotive factories can be complex, with components being handled multiple times during shipping, loading and unloading, ware house storage and delivery to the assembly line.  Imagine a scenario that a delicate piece of electronic equipment arrived at the line damaged .5% of the time.  In the automotive world that could be 100s of damaged components in a few short weeks.  How could you economically investigate this problem and zero in on a solution?  One way would be to implement sophisticated recording devices on the products for a period of time.  Then one could determine where and when in the supply chain the damage was potentially occurring.   Once it is understood where the damage was occurring, an effective corrective action could be employed.  ShockWatch® products are routinely used for these types of analysis and investigations as an effort to continuously improve the supply chain.

Regardless of the motive or situation, ShockWatch® more than likely has the product that will do the trick.  Contact a Packnet representative to find out more about the uses of shipping and handling indicators and monitors.

Not all custom foam solutions are scalable

Creating a custom foam packaging solution requires more than just understanding the dynamics of the product and transport, one... read more

Packnet uses corrugated plastic for many of its custom packaging and reusable solutions.   This material is ideal for custom... read more

Lumber prices should continue to rise in 2014

While we still have a month or so left in 2013, it is interesting to take a look at... read more

What are the seller’s liabilities for shipping damage?

Damage to your product during shipping or transit is something that can happen regardless of precautions taken.   Minimizing the... read more

“Smart Technology” is a general term relating to the ability of a device to capture and transmit data as... read more

Electro Magnetic Interference (EMI) is any electrometric transmission that can potentially interfere with the proper functioning of an electronic... read more

Is corrosion protection needed during shipping?

A product that is shipped internationally or stored for an extended period can be exposed to a number of... read more

Consider the plight of the emergency medical worker who rushes to the aid of victims.   The response needs to... read more

Most of the packaging/crating solutions that Packnet builds will either get handled by shippers, dockworkers or warehouse material handlers.  ... read more

This website uses cookies and similar technologies to ensure that we give you the best experience. By continuing on to the site, you are consenting to this use.OKPrivacy Statement