US manufacturing continues to grow in 2014

US manufacturing continues to grow in 2014

Reading some of the latest headlines relating to US manufacturing:

According to news sources, manufacturing has expanded for 14 consecutive months.   Great news on the manufacturing front as improvement continues.

The sectors in manufacturing that are the biggest drivers (Bloomberg):

US manufacturing has been doing particularly well in the global economy.  China is still the leader, but the difference between China and US manufacturing output is growing at a slower rate.  In fact, for 2014,  jobs gained by reshoring is about the same as Us jobs lost due to outsourcing.   This may seem like a non-news item, but when compared to the job losses rate in the previous decade, a stalemate is a major gain  Source.

The chart below shows total US manufacturing output.  2014 is estimated. –U.S. Census Bureau. 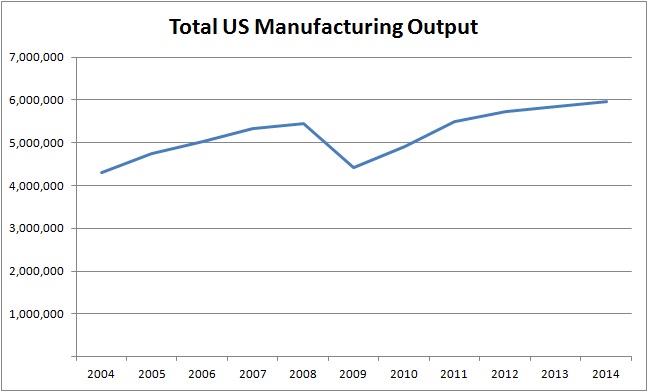 2014 is a projection based on first 4 months data; most economists are expecting the end results to be higher.

As one can see from the chart, total US manufacturing output has well recovered from the 2008 crash and has maintained steady growth.

Manufacturing employment charts do not look as good.  Source-/www.bls.gov 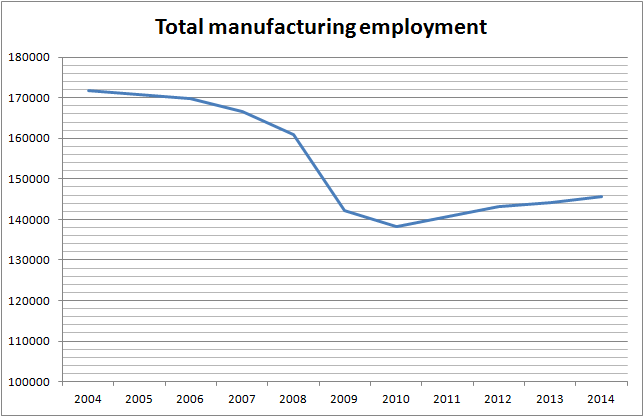 As one can see from this chart, while manufacturing jobs are recovering from the 2010 low point, they are now where near the 2004 levels.   The main reason that employment levels are not fully tracking with output is that most of the manufacturing output increases have been due to automation.   It is true that some manual jobs has come back from China, these gains have not kept up with outsources jobs to China until the last 4 months.

Many are hoping that more manufacturing jobs will help restore the middle class in the US.  So far this has not been the case as most of the jobs brought back are lower paying jobs.   High paying union jobs have not been returning.

However, while manufacturing has not directly added back a lot of jobs, the ancillary affects of money being pumped back into the US economy has created jobs in the service sector as well as manufacturing support jobs.

The most encouraging thing about the latest data is that we are seeing a steady consistent trend:

From Bloomberg: “Manufacturing’s growing pretty solidly,” Jim O’Sullivan, chief U.S. economist at High Frequency Economics in Valhalla, New York, said before the report. “The backdrop for consumer spending looks positive with the labor market improving. Capital goods orders have strengthened. And the housing recovery, while it’s been choppy, does seem to be getting back on track.”- Source

While unemployment (6.2%) is still well above the 4.0 % threshold that many economist say is full employment, there are lots of reasons to believe that the rest of 2014 will see good overall economic growth.

When choosing a supplier for your company, cost is (and should be) a major factor in the selection process. ... read more

Global trade regulations are stringent, and enforcement of them is only getting stricter. If you violate one, it’s money... read more

There are a multitude of programs that can go under the umbrella of lean manufacturing.   Theory of Constraint techniques... read more

Six areas where material handling is costing you

While often ignored, material handling can end up being one the largest cost areas for a business. It can... read more

6 Questions for Manufacturers to Choose the Right Packaging

Between compliance, customer requirements, and product protection, there is a lot for manufacturers to consider when choosing product packaging.... read more 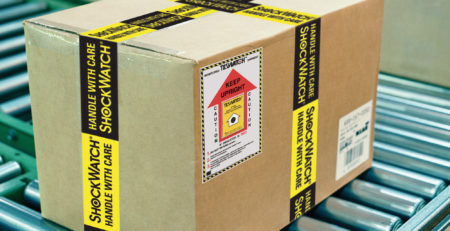 As we recently explained in a post on the plastic market, we at Packnet are acutely aware of the... read more

Outsource CNC Precision Cutting or Invest in your own Equipment?

Large and small manufacturers alike are always looking for the most cost-efficient ways to run their operation. When you... read more

The US has expressed concern over the escalating tension around the Diaoyu (China’s name) –Senkaku (Japan’s name) islands.   The... read more

Packnet continues to invest despite the stagnating economy

There has been some good news and bad news for US industry lately.   Data from the Institute for Supply... read more

Packnet utilizes a wide variety of equipment and materials to provide its customers with the optimal custom packaging solutions.... read more