The frigid weather has definitely cooled short term demand for lumber. The middle to eastern part of the US has experienced the severest winter in decades, and its impact has been felt across many sectors including manufacturing, retail and construction. Initial data shows new housing construction dropped 16% in January – See article. Forbes reports that builder confidence in February took a sharp dive with the sentiment index dropping to its lowest point since May 2013. See Article. Many lumber deliveries are being postponed as builders are unable to get out to job sites to start construction.

While some lumber traders are getting a bit nervous, the general sentiment is that lumber demand will stay strong in 2014; which is mainly why prices have stayed the same this year or even increased in some segments.

In order to get a picture of 2014, one needs to review the past year.

Below is a chart showing new housing starts by month comparing 2013 to 2012 Chart from https://www.census.gov/construction/bps/uspermits.html. 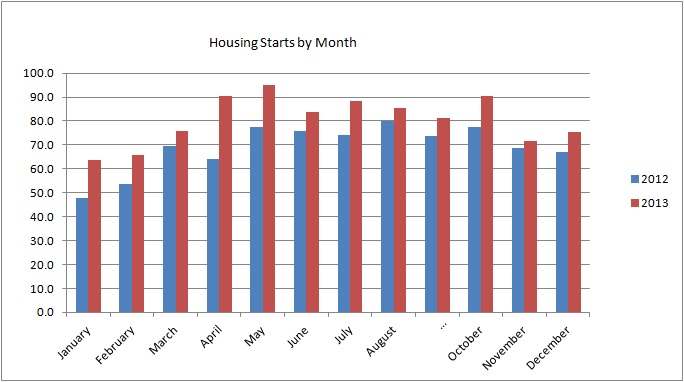 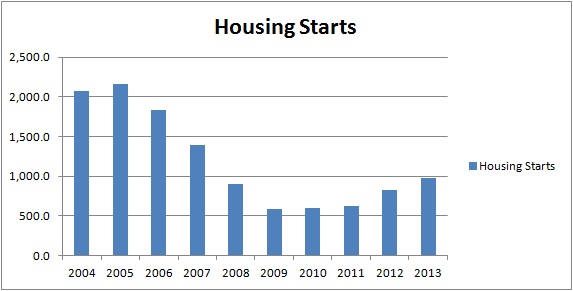 While 2013 was still less than half of what it was in 2005, the trend has been increasing since 2009. Kiplinger is projecting continued double digit increases in new housing for 2014 – see article. In fact most of Kiplinger’s 2014 economic forecasts are showing better than average growth for most economic sectors.

Another factor for the lumber market is exports and the last half of 2013 saw significant increases in exports to Asia. While export demand is hard to forecast, many believe that China’s demand in 2014 will exceed 2013 and should continue to put pressure on lumber supply.

Many are forecasting that while lumber demand has dropped because of weather, there is a pent up demand that will continue to increase. US and Canadian Lumber suppliers are still planning on increasing capacity in 2014. See article. If the severe weather continues well into February and March, it is possible that some softening of lumber prices will occur, but long term indicators point to lumber prices increasing in 2014. Hopefully these prices will stay below the peak last April which was on average 15% higher than current prices.

Sometimes it’s a lot more than providing a packaging solution

Corrugated plastic is used to build a folding boat

In previous blogs we stated how great corrugated plastic is for making reusable packaging containers that are tough, water... read more

Most of our major allies are peace loving societies where going to war or conducting any major military action... read more

Reasons to Use On-site Packing and Crating Services

There are multiple reasons why you should consider using a third-party crater to package your equipment for shipping. Several common... read more

Environmentally friendly packaging films that will meet any environmental regulation

Plastic is an ideal packaging solution, it is flexible, moisture resistant and inexpensive.  It often is durable enough to... read more

Polyethylene resin, a major component of several types of plastic that Packnet purchases, has been increasing in cost throughout... read more

If you have technicians that carry around delicate equipment or tool kits, or a sales force that needs to... read more