In our last blog, we noted the rebound of manufacturing. President Obama specifically touted manufacturing in his 2014 State of The Union Address. We concluded that he was largely correct that Manufacturing did rebound nicely since 2008, but we questioned whether manufacturing was going to be the answer to employment growth.

So what is manufacturing’s potential impact on future US growth in employment? Does manufacturing deserve the apparent attention that the US government is giving it? 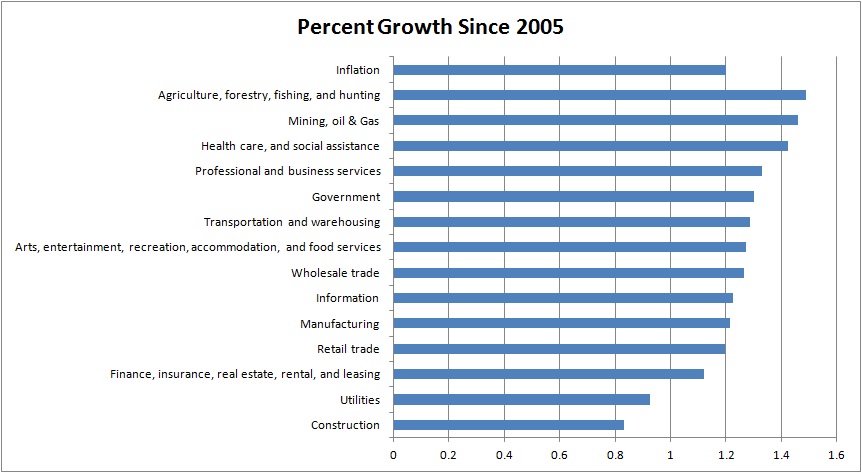 From this chart manufacturing has only the 10th best growth rate of 14 sectors and just barely beating inflation. The areas that had the best growth were Agriculture, Mining (including oil and gas), Health Care, Professional Services and Government.

The areas that had the worst growth rate were Construction, Utilities, Finance and Retail Trade, with Finance including banking, insurance, and Real Estate. All of these areas are directly related to housing boom and bust.

Based on the percent growth chart, manufacturing would hardly be worth singling out.

The next chart is the percent of total annual output that each segment represents in terms of dollars.

As one can see from the chart above, manufacturing dominates in terms of gross output in dollars, so the impact of manufacturing on the gross national output is significant. That factor may be a major reason that it is consistently brought up as a key sector the US economic growth.

The next chart shows percent employment by sector.

If one were to combine, employment and growth in terms of ranking sectors, then one could argue that this chart would show which sectors have the largest impact on employment and probably the economy. That chart below simply shows how segments would be ranked if growth rate was factored by percent employment. One could argue that the chart shows what sectors had the largest impact on employment growth since 2005. The chart below compares growth to inflation, if the sector did not grow faster than inflation then it had negative growth. 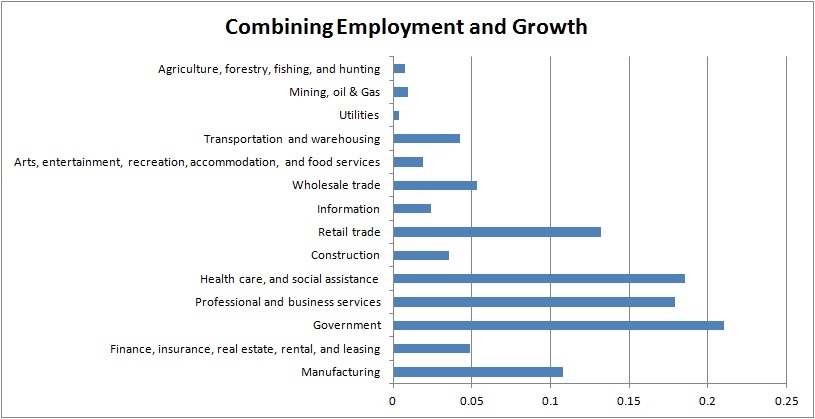 From the above chart once can see that the sectors that had the largest effect on the current employment growth since 2005 are:

These areas by far and away had a larger impact on employment growth than any other area including manufacturing. So why would manufacturing growth be highlighted as opposed to the other areas? Below are some reasons:

Regardless of how manufacturing ranks in employment impact, it is still very important to the economy. In terms of gross dollars, manufacturing has arguably the most significant impact on the US economy. Manufacturing activity drives warehouse and distribution, freight, construction, professional jobs and a host of other sectors. It also has a large impact on exports. You can’t export most of our Health Care output or Government output. The Manufacturing Sector, while not directly providing the employment that it once did, still has one of the largest affects on the US economy.

Packnet has a variety of options when it comes to precision cutting; volume, tolerances and material are some of... read more

Packaging, while extremely valuable for safely transporting or storing products, usually doesn’t add much functionality to the product.  It... read more

Packnet’s mobile packaging service will give you peace of mind

Shipping large, expensive or delicate equipment overseas is a daunting task at best with so many issues to understand... read more

In our last blog we discussed the variety of capabilities that Packnet possesses and how we can combine different... read more

A massive longshoreman strike that was threatened for the first of the year has been averted (at least temporarily)... read more

There are a multitude of programs that can go under the umbrella of lean manufacturing.   Theory of Constraint techniques... read more

Protecting overseas cargo from the elements

In order to safely ship delicate electronic equipment overseas, one must address several factors.  The product must be secured... read more

We have written several blog posts relating to how to make sure a product gets shipped so it arrives... read more