Are plastic pallets safer than wood?

Are plastic pallets safer than wood? 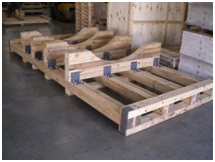 There was an article in packagingeurope.com regarding wood pallets that was posted in August 2014.  The article was written by Jim Hardisty, Managing Director of Goplasticplallets.com.  The post was in response to an UK Amazon retail worker getting sick and a claim by the GMB which is the Union that represented that worker that the illness came from insect contamination in the wood.   To quote Jim,”…using wood and health and safety of staff at serious risk and causing untold damage to the UK economy”.   Additionally he stated:  Poor pallet hygiene however is a much bigger topic than insect contamination alone.  Mould and bacteria are other common signs that pallets are being kept in unsanitary conditions which, when using plastic varieties, can be easily combated with regular cleaning as plastic pallets are 100 per cent water resistant.  Timber pallets are much harder to preserve as even kiln dried varieties contain some moisture, making them susceptible to mould growth and blue stain fungus.”

He admitted that while compliance to ISPM15 was an effective way to control the insect issue, he implied that standards are not consistently enforced. His final statement in the article was:

“Guide or no guide, the fact remains that wooden pallets are still inherently more likely to harbour contaminants than plastic ones – the only variety that can be repeatedly steam cleaned and reused guaranteeing optimum hygiene throughout its working life.”

The Timber Packaging & Pallet Confederation (TIMCON) responded harshly stating that the comments from Jim Hardisty were highly inaccurate and obviously self serving. The claim about the Amazon retail workers illness has not been substantiated and statements claiming that bacteria and mould is a bigger problem with wood than plastic pallets are false.

We at Packnet agree with TIMCON.  Millions of wood pallets have been used for many years in the US with no documented cases of worker illness attributed to mould, bacteria or insects in pallets.   There is no valid study that shows that plastic pallets are less dangerous to workers than wood pallets.    There have been studies comparing plastic cutting boards with wood cutting boards in regard to carrying bacterial and the conclusion was that wood was safer (click here for study) even though many chefs assume that plastic is safer.   The relevant issue from the study is that the assumption that plastic is less susceptible to bacterial contamination than wood is not true.

Packnet fabricates custom and standard wood pallets that are ISPM15 compliant.   Packnet also supplies plastic alternatives to wood pallets, specifically plastic pallet containers.    One such product is PermaPal™ which is a highly durable reusable pallet container that is specially configured to save space and loading time.

There are valid reasons that one might consider plastic over wood in certain situations, but health is not one of them.

Reusable Paper Cartons Costing you More than you Know?

If your reusable packaging is not lasting more than two uses, or if it takes up too much space,... read more

How to Model Amazon’s Frustration-Free Packaging

Ten years ago, Amazon introduced frustration-free packaging. According to Amazon, it was “designed to reduce waste and delight customers... read more

When Packaging Makes or Breaks your Success: Special Circumstances in Product Packaging

While most companies could improve their packaging on some level, be it the materials, the protocol, or the process,... read more

How environmentally friendly is corrugated cardboard?

Since cardboard is biodegradable and recyclable, one would think that it should be the most environmentally friendly packaging material... read more

Paper or plastic; which is worse for the environment?

There has been a lot of press lately on the environmental problems that plastic bags are causing.   A recent... read more

Lumber prices should continue to rise in 2014

While we still have a month or so left in 2013, it is interesting to take a look at... read more

Are Your Packages Being Mishandled?

You have probably heard about FED EX and UPS employees getting caught on camera mishandling packages.   We have provided... read more

“Smart Technology” is a general term relating to the ability of a device to capture and transmit data as... read more