Crude Oil prices are dropping, nobody is sure where they will bottom out, but everyone is seeing the effect at the gas pump as the price per gallon on the average is about 60% of what it was a year ago (January 2014).   Diesel prices are experiencing a similar drop, so the question is:  How much will over-the-road shipping costs drop in 2015?

To get some perspective one needs to understand the effect of crude oil on the truckers cost.

Below is a chart bases on data from eia.gov website-which is the US energy information administration.

As one can see from the above chart, Crude Oil makes up about 50% of the total costs of diesel fuel on the average. 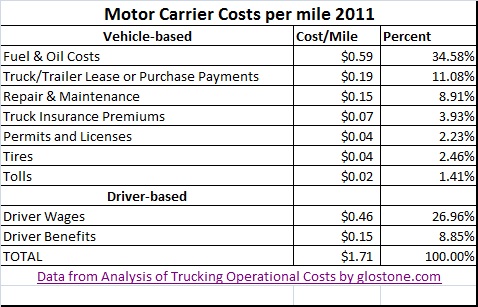 Based on the above chart, one can see that fuel makes up about 35% of the total operation costs of an average trucker.  So if the cost of crude oil drops by 50%, then the total cost of diesel would drop 25% and this should reduce the trucker’s operational costs by 8.7 %.

So does this mean that shipping costs should be 8-9% lower in this scenario?   Probably not as there are many more factors to consider.  First of off all shipping prices are a market based decision,  certainly a large influence on that would be operation costs but we seldom see end use prices 100% correlated to supply costs.   Otherwise we would see plane ticket prices and baggage carry on fees change dramatically – so far they have not.

Another factor to consider is that while fuel makes up a significant part of the truckers cost, there are other factors that drive overall cost, most notably drivers wages and benefits which add up to 35.81%.   Many are predicting that labor costs will increase significantly in 2015 because of a shortage of drivers.   See our posts on trucking costs over the next five years.  Also as the economy heats ups and demand rises, prices could actually increase if there is a shortage of trucking capacity.

It appears that short term, many believe that oil prices will continue to drop.    A recent article in MSN money claims that the price of oil could hit ridiculously low prices, Source.

Kiplinger came out with an article that claims that oil prices won’t go above $90.00 per barrel, but predicts that shipping cost will increase:

“Despite lower fuel prices, figure on higher trucking and rail freight rates. With the economy revving up, there’ll be more cargo moving on highways and rails, spurring demand for trucks and train cars and bumping shipping rates higher. Trucking—up about 6% to 7%, largely because trucking firms will hike pay to hire the drivers they’ll need to handle the expected increase in shipments.” Read more at http://www.kiplinger.com/article/business/T008-C000-S000-business-costs-in-2015.html#CbOmXVxzv6drOFug.99

According to one source we have in the freight forwarding business, trucking prices have not dropped very much so far, and is not seeing any signs that they will drop significantly in the future.

In the wake of the recent countervailing duty (CVD) Trump has implemented on Canadian lumber, manufacturers are looking to... read more

Packnet continually strives to make it as easy as possible for its customers to utilize its packaging expertise.  One... read more

The housing market has been a subject of several of our blogs over the years.   Our interest is due... read more

What stresses does your package see when shipped FEDEX, UPS or USPS?

There was an interesting article by popular mechanics a couple years ago where the author tried to compare three... read more

Good manufacturing planning should include packing and shipping

Most companies spend a lot of effort on the planning of their product build, but often, once the product... read more

Packnet uses corrugated plastic for many of its custom packaging and reusable solutions.   This material is ideal for custom... read more

You can see pallets in just about every warehouse or shipping area.    Most people don’t think a lot about... read more

Some common FAQ’s on Packnet LTD

Over the years, Packet gets a lot of questions about our capabilities and services.   Below are just a few... read more

J.C. Younger manufactures and refurbishes industrial chillers.   They sell or rent chillers of different sizes and capacities for a... read more

A recent case study demonstrates Packnet’s creative use of it is capabilities and its flexibility in creating custom packaging... read more